I was born on the Army base at Fort Campbell, Kentucky on May 8, 1951. My father was a young Army officer and my mother was a true southern belle. I was the eldest of three children. We moved around a lot, as military families do, and finally settled in Pittsburgh, Pennsylvania when I was in the second grade. I had a little portable record player and began collecting records at an early age. The first record I bought with my own money was “Big Bad John” by Jimmy Dean. I also loved hearing my parent’s calypso records and attending the Pittsburgh Youth Symphony Concerts. I’ve always loved all types of music.

I began taking trumpet lessons in elementary school but I didn’t have what it takes to play trumpet well. I asked my band teacher what I should do and he said he thought I had a good sense of rhythm so why didn’t I try the drums? I did and it worked out very well. After the Beatles appeared on the Ed Sullivan Show in 1964, like a lot of other young kids, I started playing rock and roll with a band of my school friends called The Lost Chords. We were just young amateurs but we had a lot of fun together playing songs by The Ventures, The Dave Clark Five and Paul Revere & The Raiders. 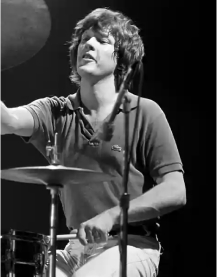 In the ninth grade I went to boarding school in Virginia. This is where I got turned on to Soul Music. I loved Otis Redding, Sam & Dave, Booker T. & The MG’s, The Temptations, Smokey Robinson & The Miracles, The Supremes and, of course, James Brown. I also got heavily into Bob Dylan and inspired by him began writing poetry.

After two years, I moved back to Pittsburgh and developed a strong interest in drawing and painting. My art teacher said he thought I should apply to the Rhode Island School Of Design. I did apply and I was accepted in 1970. 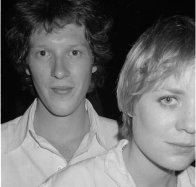 At RISD I studied painting, but I missed playing music. I invited some of my friends to form a band to play at school parties and dances. One of those guys was David Byrne. On a hunch, I invited Tina Weymouth to join the band but she declined, because, in her view, being in a band was a guy thing. We called this band The Artistics. We mostly played cover songs but also during this time we wrote “Psycho Killer” and “Warning Sign.”

Tina and I graduated from RISD in 1974 and moved to New York City where we reunited with David and moved into a raw loft at 195 Christie Street. I asked David to form a new band and, thankfully, this time Tina also joined on bass guitar. After working up enough songs, we got a gig at our favorite club, CBGB’s, where we opened for the Ramones in May of 1975. We called our trio Talking Heads.

In 1976 we signed a record deal with Seymour Stein of Sire Records. I found out that Jerry Harrison might be available to join our band which was great because he played keyboards and guitar and we loved his work with the Modern Lovers. With Jerry on board we recorded our first album in 1977. After that, things really took off. We worked so hard but we had loads of fun, too. I am honored to be a founding member of Talking Heads.

We use cookies to enhance your browsing experience, serve personalized ads or content, and analyze our traffic. By clicking "Accept All", you consent to our use of cookies.
CustomizeReject AllAccept All
Manage consent

This website uses cookies to improve your experience while you navigate through the website. Out of these, the cookies that are categorized as necessary are stored on your browser as they are essential for the working of basic functionalities of the website. We also use third-party cookies that help us analyze and understand how you use this website. These cookies will be stored in your browser only with your consent. You also have the option to opt-out of these cookies. But opting out of some of these cookies may affect your browsing experience.
Necessary Always Enabled
Necessary cookies are absolutely essential for the website to function properly. These cookies ensure basic functionalities and security features of the website, anonymously.
Functional
Functional cookies help to perform certain functionalities like sharing the content of the website on social media platforms, collect feedbacks, and other third-party features.
Performance
Performance cookies are used to understand and analyze the key performance indexes of the website which helps in delivering a better user experience for the visitors.
Analytics
Analytical cookies are used to understand how visitors interact with the website. These cookies help provide information on metrics the number of visitors, bounce rate, traffic source, etc.
Advertisement
Advertisement cookies are used to provide visitors with relevant ads and marketing campaigns. These cookies track visitors across websites and collect information to provide customized ads.
Others
Other uncategorized cookies are those that are being analyzed and have not been classified into a category as yet.
SAVE & ACCEPT